#Voices: Vidya Balan Starrer ‘Shakuntala Devi’ Highlights How We Rarely See Our Mothers As Women With Their Own Hopes, Dreams And Imperfections

Did you spend the weekend catching up on new releases like Netflix’s Raat Akeli Hai and Amazon Prime Video’s Shakuntala Devi? Because me too! *virtual high five* While both these films have their own share of hits and misses, one thing is undeniable—they introduce us to a world of interesting complex female characters. And since I’ve already gabbed at length about why the gender politics of Raat Akeli Hai fascinates me, I now want to direct our attention to the women of Shakuntala Devi. The film, a biopic on the incredible math genius, author, astrologer and Human Computer we know as Shakuntala Devi, delves majorly into her bumpy personal relationships that were a product of her upbringing and her passion for what she could do with mathematics. Furthermore, I thought the Vidya Balan and Sanya Malhotra starrer also offered an important insight on the inexplicable relationship between mothers and daughters.

In fact, there is a scene in the film where the antics of Vidya’s Shakuntala Devi and Sanya’s Anupama Banerjee make the rest of the characters sigh loudly and exclaim, “Mothers and daughters!” As someone who fights with her mother on a regular basis over everything—from chores to gender biases to getting married—I understand that resigned emotion all too well. tHE relationship between a mother and a daughter is too complicated for anything but them to understand. Why? Because every mother wants her daughter to be like her, and yet be better than her. And every daughter wants to be a different mother than her mother was, and ends up realising that Mommy indeed knew best. At least about some things. With this tumultuous aspirational yet contradictory emotion going on, it is hard for anyone to see mothers and daughters as just that. They’re also friends, sisters, rivals, frenemies, and each other’s mothers when the need be.

Also Read: ‘Raat Akeli Hai’ Lacks Thrill, But Is Still A Good Mystery And A Commentary On How Patriarchy Breeds Toxic Femininity

In Shakuntala Devi, we see a young Shakuntala start hating her mother because she never stands up to her husband for her daughters. Shakuntala believes her mother’s silence is the reason she never had a proper school-going childhood and her elder sister didn’t have a fighting chance to survive her illness. She blames her father, but blames her mother more because she could’ve stopped it. Her mother, like most mothers, makes the typical mom ‘bhavishyavani’ with a sense of foreboding—“The world goes in circles. You’ll realise once you become a mother yourself and your daughter troubles you just like this”.

Eventually we see that she was right. When Shakuntala has a daughter of her own, we see her assume the same controlling parental behaviour that her father had. She begins imposing her own hopes and dreams on her daughter Anu, instead of listening to what she wants. The result? Anu thinks that she has had a bad childhood where she never got to do what she wanted, just like Shakuntala thought when she was a kid and couldn’t go to school. If Shakuntala’s silent parent was her mother, in Anu’s case, it is her father, Paritosh, who lets his wife take all the decisions pertaining to their daughter’s future. How could he argue? Shakuntala had the biggest proof of power of attorney after all—the stitches of her cesarian delivery from when she gave birth to Anu!

It is a very common realisation that we often turn into our parents when we grow up. But if not, then at least we understand their motivations and intentions for doing what they did a little better when we become parents ourselves. Anu has several epiphanies when she goes from not wanting a child at all, to being thrilled about being pregnant, to having doubts about being a good mother and finally realising that prioritising her career does not make her a bad mother. Some times a woman can feel both—guilt for leaving her child alone while she is off pursuing her career, and the frustration of being tied down and stopped from doing what she loves because of her child. Neither makes you a bad mother or a weak person. But your final emotion is often influenced by several factors in your life, particularly the kind of familial and spousal support and the societal atmosphere surrounding you.

Anu feels guilty for leaving her daughter alone while she is off to work, because she is afraid of being labelled a bad mother by the society. But what if she carted her daughter along for her every work assignment, or smothered her with her overbearing presence all the time, thus turning into her mother? Would her daughter also hate her like Anu hated Shakuntala? And that’s when she realises, a perfect mother doesn’t exist, shouldn’t exist in fact because parenting isn’t an exact science. We’re all just winging it, aren’t we? Just like her mother, Anu’s husband is a supportive one too. But a mother’s journey is often solitary because the sheer scrutiny of it all! Not to mention, Shakuntala was right. The nine months, the labour, the stitches… they give you a sense of propriety over the person, don’t they?

It takes an emotional roller-coaster ride for Shakuntala to have her epiphany. When she does, she realises that her mother was perhaps doing what she did out of her own, twisted sense of love. Love for her husband, who she thought knew best and she couldn’t speak up against. Love for Shakuntala, the daughter who could have a better future any day than her sister, who would be a liability for life and might keep Shakuntala and their family down. Shakuntala had money and her genius that gave her the self-worth to be so fearless before her father. What did her mother have? Nothing. Isn’t that why most women curb their voices?

Shakuntala vowed to not be like her mother, just like her daughter Anu vowed to not be like Shakuntala. And both realised (the former a very later and the latter, early on) that no matter what they did, they’d still always be doing something wrong in the eyes of the society or their own children. In fact, if anything, their desperation to not be like their mothers made them try a bit too hard, and almost lose out on something that could’ve been so easily salvaged. 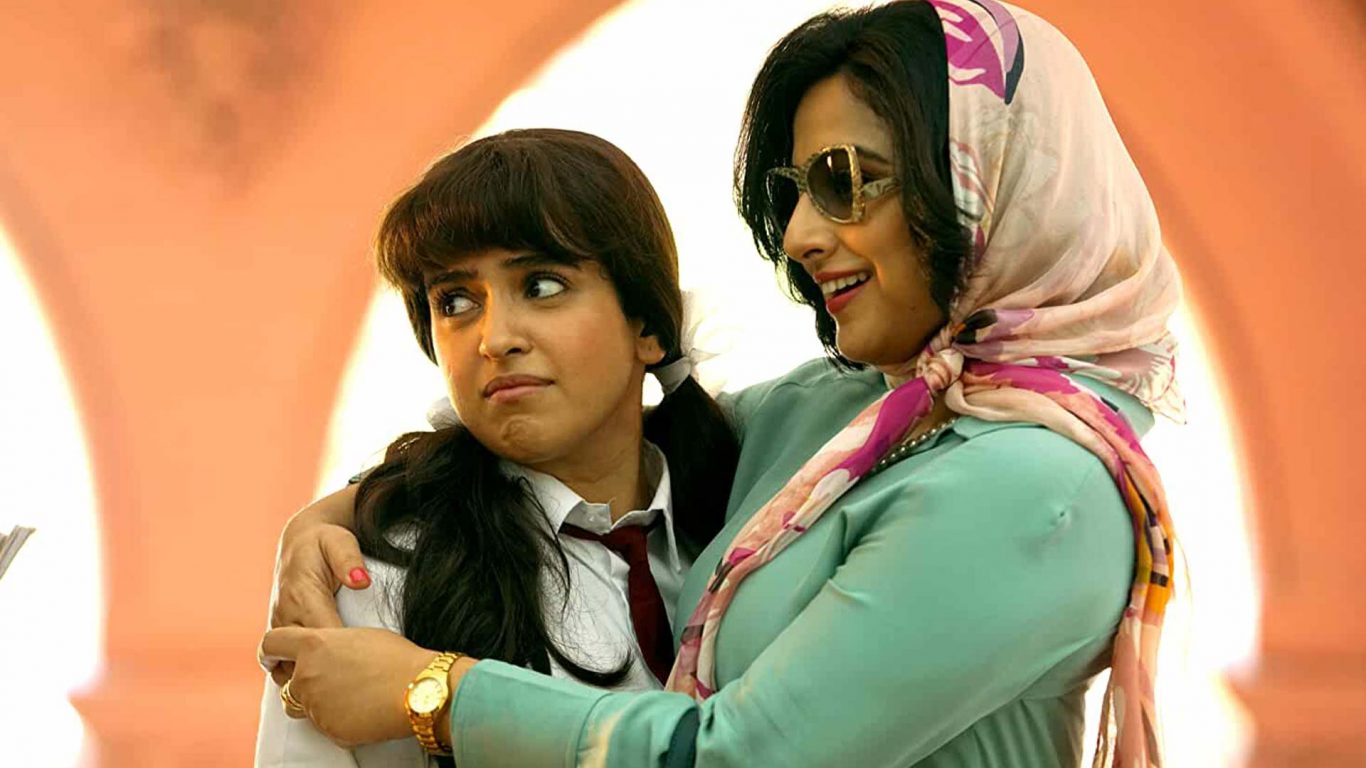 Also Read: “Stories Need To Become Bigger Than Gender.” Shakuntala Devi Director Anu Menon Talks About Working With Other Women, And How She Answers The ‘Female Director’ Questions

Mothers have often been portrayed as superhuman, especially by Bollywood. And sure enough, they are all that. But even superheroes are not perfect and it is their humanity that often brings in this element of imperfection. An important lesson that Shakuntala Devi then imparts is that we rarely look at our mothers as women first, with their own hopes, dreams, ambitions and imperfections. Mothers never have a rulebook that tells them exactly how to raise their child; they’re doomed if they do it in a certain way and doomed if they don’t. But just as every superhero’s origin story shapes them into who they become eventually, with lots of trial and error in between, mothers are also shaped by the social environment they’re raised in as women. And we all know, it is not an easy life for a woman, is it?

Me, I get angry at my mother for denying me permission to go for a night out or reprimanding me for not doing chores at home. I berate her for babying my father and doing everything for him, or allowing him to force my brother and I to attend family events we didn’t want to because I am all woke and empowered after reading feminist prose. But it took me getting a few years older to understand, quite literally, when and where she was coming from. Now, I could get angry and pick fights with her for denying me or limiting me in all the ways she did. I could even vow that I’ll never do what she did when I have kids of my own, because that’s what I think would be better.

Or I could share some of my woke-ness with her by gradually and patiently introducing her to this new world that accords women more rights and freedoms. I could tell her it’s okay, I understand, but there’s now a better way of doing what she did. And I could imbibe from her the wisdom that her past mistakes and experience has imbued her with, and become a mother or a woman, who doesn’t chase perfection, but prefers to make the best of her situation.

Of course, we’d still be fighting all the time. Because mothers and daughters! *sigh*