When it comes to fashion, nobody does it quite like the Kardashians. Everyone is a trendsetter in the family that’s famous for…what again? Anyway, moving on! The Kardashians have made some fearless fashion choices and never fail to bring something new to the fashion table. In other words, keeping up with the Kardashians could be exhausting but also exciting, especially when it’s their fashion in question.

Kim Kardashian, for one, has never shied away from taking daring fashion risks and expressing her individuality through her style, even if some find it apprehensive or appalling. She basically refuses to abide by the fashion status quo and defies all the rules to make her own. From hyping up the contouring trend to rekindling the 90s fashion trends, Kim has brought ample fashion trends in vogue.

However, while we are eternally grateful for some of those trends (think sheer tops), there are other we wouldn’t have minded living without. I am talking about some seriously problematic or controversial trends that KKW has wrongly started, which were not taken well by either the moral police or the fashion police.

Since today marks the 40th birthday of the fashion…person (I wanted to say icon but I don’t think she is one), let’s look back at all the exciting (and some questionable) fashion trends popularised by Kim Kardashian that she can’t stop, won’t stop wearing.

Also Read: Kim Kardashian Posted A Video Of Herself Wearing A Tight Corset That Makes Her Waistline Look Unrealistically Thin. How Is She Breathing In That??

Kim K knows that when you got an hourglass body and envious assets like hers, you gotta flaunt ‘em the right way. Enter, bodycon dresses. You can find these figure-hugging midi dresses on every brand and stores these days but you have Kim to thank for making it a fashion hype.

Kim is a big fan of monochrome looks and it shows. The monochrome co-ords are synonymous with the KUWTK star like Monday mornings are with hangover (okay, that was a bad example but you get the point). She mastered the art of pulling off single shade outfits before it cool. Hell, she was the one who made it cool.

There was a period when all we could see on our Instagram feeds was influencers rocking chic bodysuits and high waist denims. Somehow, that period is still going on strong. However, way before bodysuits became a thing on our screens, Kim took them to the streets wearing it with pencil skirts, bike shorts and skin-tight jeans. 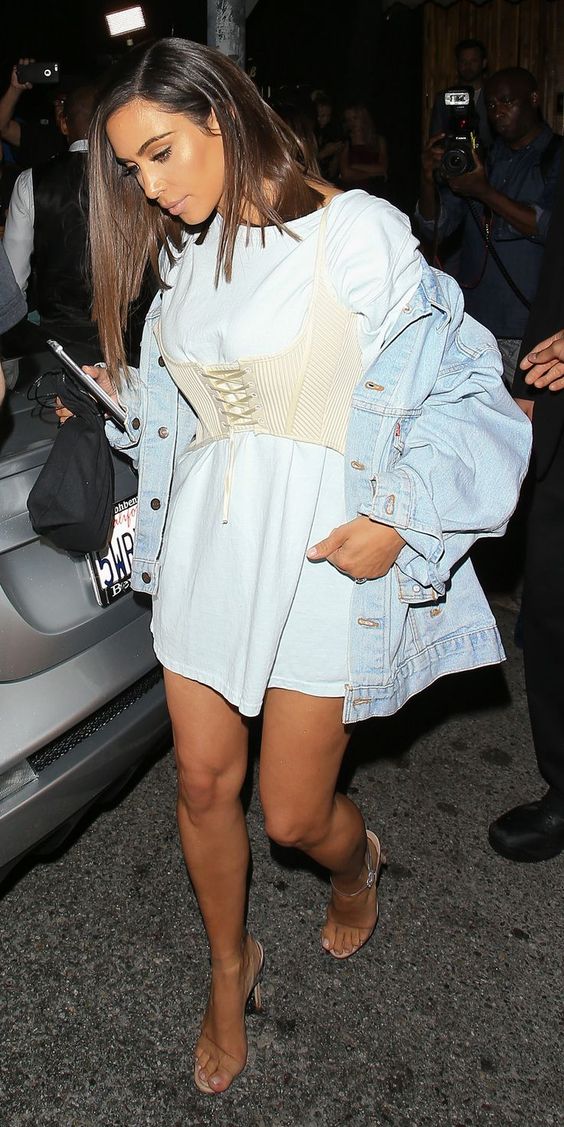 There are easily a hundred ways to do corsets but this certainly takes the prize. Incredibly stylish and chic, corset over shirts, tops, tees and dresses was first seen on Kim and later backed by the likes of Gigi Hadid and Ashley Graham and more who followed the suit. 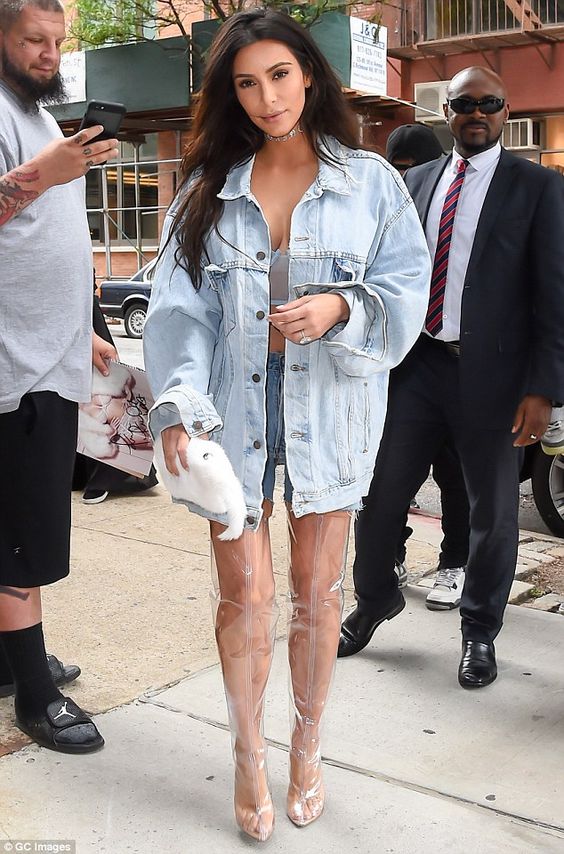 Clear footwear trend has literally all over the fashion scene now but our absolute fav would always be the thigh high clear boots that Kim took to the streets with an oversized denim jacket. We saw the trend on the runway much later at the Chanel SS18 show while Kim being a true fashion guru, already debuted the PVC boots in 2016.

Clearly, Kim is big on latex and leather and if you ask us, she is probably the only one who we could imagine sporting the super shiny and slick clothing like that. From jumpsuits to dresses, Kim has done latex in different cuts and colours. It has become a Kim Kardashian thing now, and we’d like it to stay that way.

Kim Kardashian recently launched a range of shapewear for pregnant women under her brand Skims, probably in an attempt to make mom-to-be shapewear a fashion trend but it only backfired. I mean, what was she thinking? The shapewear range was met with backlash as it subtly promoted negative body image issues and pregnant women have plenty to deal with anyway. She clarified by saying it doesn’t shape but supports the baby bump, but no one was really convinced.

We don’t get Kim K’s obsession with thin waist. We get how she gravitates towards clothing that accentuates her figure and that’s amazing, but wearing a waist-clenching corset for the Met Gala was a bit crazy and we wouldn’t wish this trend even on our worst enemy. She revealed that the corset left her with serious markings on her body and pain which simply perpetuates beauty stereotypes and is toxic. She couldn’t even sit in the bloody thing.

Kim K brought animal print back to the scene, because well, like I said, the girl has a fetish for reviving the long-forgotten trends. However, fashion enthusiasts remain torn between whether it was a wise style choice or not. She might have made it work for her a couple of times but the dicey print is not everyone’s cup of tea and we can’t say we were amused.

Also Read: Kim Kardashian Was Okay With Peeing Her Pants At The Met Gala. Okay, Let’s Not Go Crazy In The Name Of Fashion